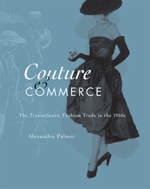 Montréal, May 25, 2002—The Editors' Association of Canada (EAC) is pleased to announce that Camilla Blakeley, project editor with UBC Press, has won the 20th annual Tom Fairley Award for Editorial Excellence for 2001 for her work on Couture and Commerce: The Transatlantic Fashion Trade in the Fifties by Alexandra Palmer. Blakeley was praised by the judges for her handling of Couture and Commerce from manuscript through to printer’s proofs, for her creativity, for the high quality of her substantive and stylistic editing, for her selection from and matching to text of a vast number of illustrations, and for her work with the book designer. This is the first time that an in-house editor has won the award.

This year, for the first time, a cash prize of $2000 accompanied the Tom Fairley Award. EAC and the publishing firm of Macfarlane Walter & Ross each donated $1000. The Tom Fairley Award Committee is currently soliciting donations to permanently endow the award.

Couture and Commerce has also earned its designer, Mark Timmings, an Alcuin Award for illustrated books. Alexandra Palmer is a curator at the Royal Ontario Museum in Toronto.

The runner-up for the 2001 Tom Fairley Award was Freya Godard for her work over many years and with many authors on Regenerating Canadian Forests: Principles and Practice for Ontario, edited by Robert G. Wagner and Stephen J. Colombo and published by Fitzhenry & Whiteside for the Government of Ontario.