E.D. (Ted) Blodgett, FRSC, is University Professor Emeritus of Comparative Literature at the University of Alberta. He is currently teaching at MacEwan College and the U of A's Campus Saint-Jean, where he is professeur auxiliaire in Études canadiennes. His research has varied from mediaeval European romance to Canadian comparative literature. His publications include Five-Part Invention: A History of Literary History in Canada (University of Toronto Press, 2003) and Elegy (University of Alberta Press, 2005). He has published seventeen books of poetry, two of which were awarded the Governor General's Award. A bilingual edition of his French poems, Le poème invisible, will be published in 2008. 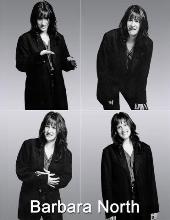 Barbara North's high-energy stand-up comedy has been making audiences laugh right across Canada for over ten years. Catch Barbara's award-winning comedy on radio, television and stage, from Just For Laughs to her own CBC TV comedy special, Army Brats.

Check out her brand new comedy TV series, A Total Write-Off! Barb created and stars in this quirky 13-episode show that airs across Canada on CHUM TV stations.

Barb has also been known to appear as roving comic reporter, Barb Wired, on CHUM stations and on CBC Radio.

Barb's recent stage comedies include "Journey to the Centre of the Girth" (January 2008) and a provincial election comedy, "This Province Has 22 Mullets" (March 2008).

Strange but true – Barbara has a Guinness World Record! She appeared in the longest stand-up comedy show in history (she swears this is different from her comedy show dragging on forever!)